My Favorite Books: The Hitchhiker’s Guide to the Galaxy

This post includes affiliate links. I may, at no cost to you, earn a small commission when you make a purchase.

When I was a kid, I would go the beach with my uncle, aunt, and cousins every summer. I loved swimming in the ocean, taking long walks on the beach, and eating ice cream.

But my favorite thing to do at the beach was read.

And luckily, the town had a bookstore. I always brought one or two books with me, but they were never enough. I could easily read through half a dozen books that week. I would get so engrossed in reading on the beach that I would forget to put on sunscreen…but that’s another story.

The Hitchhiker’s Guide to the Galaxy has been my favorite sci-fi series since I first read it.

The Hitchhiker’s Guide to the Galaxy starts with a man, Arthur Dent, who wakes up to discover that his house is going to be knocked down to build a bypass. He argues with the people who want to knock his house down until his friend Ford Prefect shows up.

Unbeknownst to Arthur, Ford is not from England. Or from the U.S., or anywhere on this planet. He is an alien, a roving researcher for the eponymous Hitchhiker’s Guide to the Galaxy, made famous with its “Don’t Panic!” slogan on the cover. Ford tells Arthur that the planet is about to be destroyed…to make way for a hyperspace bypass.

Ford rescues Arthur from the soon-to-be-demolished Earth. Arthur wants nothing more than to go back to England and drink tea, but instead he finds himself on a wild journey through space with Ford, Ford’s cousin Zaphod (the President of the Galaxy), Zaphod’s girlfriend Trillian (also from Earth), and the depressed robot Marvin.

Together, they explore the Galaxy, finding legendary planets; learning the ultimate answer to Life, the Universe, and Everything; and dining at the Restaurant at the End of the Universe.

I love this book and the sequels. I have read them so many times that there are passages that I have memorized. When I’m sick, I read this as one of my “comfort books.” (A comfort book is the book equivalent of a treasured stuffed animal.) And it always makes me laugh.

Douglas Adams had remarkable foresight. These books were written in the late 70’s and early 80’s, yet in many ways it predicted the future. Electronic books, presidents who were chosen for their outrageousness rather than the ability to actually lead, and robots with personalities (now patented by Google) are only three things that Adams predicted. We’re still waiting for the Infinite Improbability Drive.

Adams also had a unique sense of humor, with the ability to poke fun at society while remaining a part of it. He made fun of bureaucracy, carnivorous and vegetarian lifestyles, and, of course, politics. The only people who are fit to lead the Galaxy are those who don’t want to – and only six people in the entire Galaxy know who ultimately makes the decisions.

The humor is also completely ridiculous at times, which provides a nice balance to the social commentary, and prevents the reader from ruminating on the troubles of society. There’s plenty of bad poetry, unexpected transformations (missiles turning into…well, you’ll have to read to find out), and police shooting at the main characters while pontificating on their nature as “good cops.”

This review doesn’t do the series justice. If you like to laugh, you’ll enjoy this book!

My Favorite Books, Part 4: You Are a Badass review

Simplify, Optimize, and Scale Your Business

Collaboration results in INCREDIBLE opportunity! Last year, I joined a small accountability group, which turned into 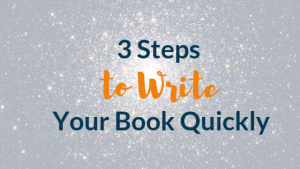 3 Steps to Write Your Book Quickly

“I’d love to write a book someday,” my friend tells me. “Yeah, me too,” says another

19 thoughts on “My Favorite Books: The Hitchhiker’s Guide to the Galaxy”